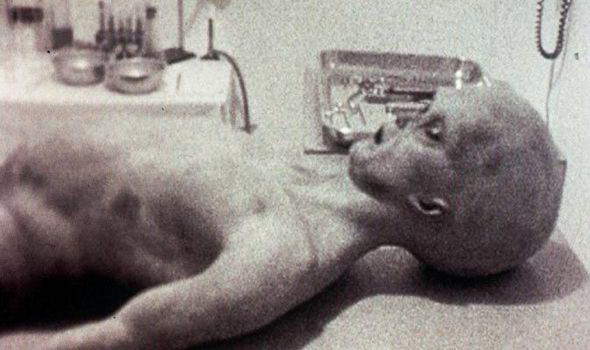 The Roswell UFO incident is not only the most mysterious, but also one of the most famous alien events. After a UFO crash at Roswell region in the United States, the witnesses were mysterious deaths or forced to move out. That was speculated the U.S. military imprisoned the alien bodies and hidden all secrets in this crash, and make the technology of U.S. so developed.

Did Roswell UFO incident real exist? Every year so many explorers arrived in area 51 without success? Why? Nevada Roswell region, the test number in the United States military is 51, so also known as the area 51. The films about area 51 took innumerable, and especially the most famous science fiction- ID4, acted by the starring actor Will Smith. In this movie, actor saw the numerous media in the world are concerned about the truth of the “Roswell incident”, that is the alien flying object crashed in the Nevada desert reported by the local farmers to the police. Later, the US army sent someone to cover up the truth, and the debris of the flying object took back to the military base for scientific research, and among them is an alien’s body. Of course, that is the plot of the movie, and what is the truth?

On July 4, 1947 is the Independence Day of USA. From Colorado about 50 kilometers and 120 kilometers away from northwest of Roswell, a farmer Mac’ Brazel heard a sound of explosion larger than the thunder at that night. On July 5, he found there are many pieces of metal about 400 meters to the farm. On July 6, he took the pieces of metal to Roswell sheriff, then report to the military and turn to the air force base. 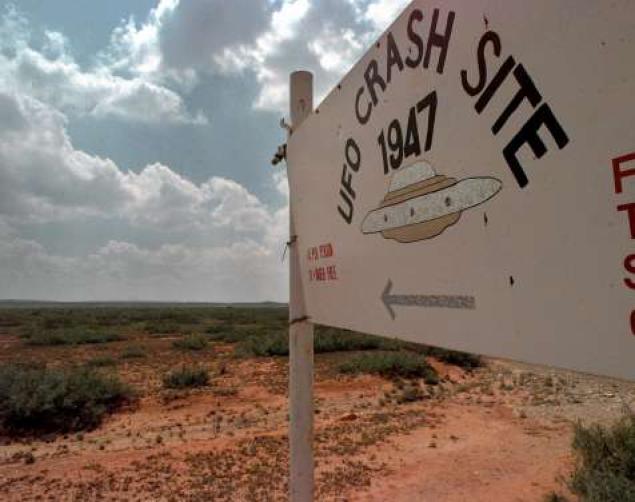 On July 7, Brazel brought Major Jesse Marciel and another officer to on-site inspection, and the military packed with a lot of things back to base. On July 8, at noon, in the distance about five kilometers west of the farm land, a civil engineer first found the remains of a metal disc, which is about 9 meters in diameter with opened top, and there were several bodies scattered in the dish inside and outside the ground. The body size is very small, only 100 to 130 centimeters in length and weight is probably less than 20 kg. 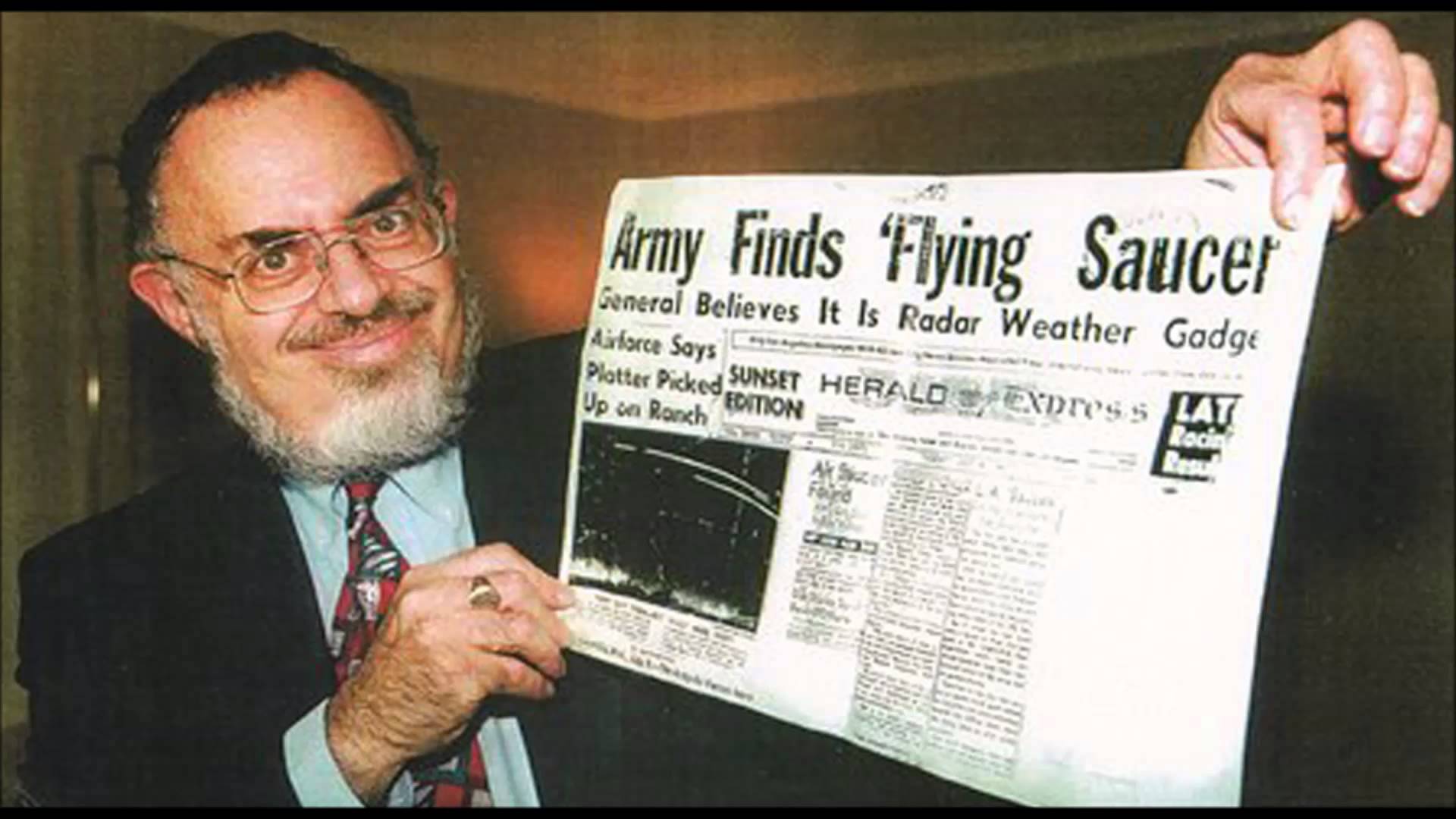 They all have no hair, big eye, small mouth, and wore the tight gray dress. In the afternoon, the army stationed in the two sites, and blockaded the area after found the metal debris.

The U.S. military communications officer Walter Hunter sent a press and released to the local two radios and newspaper issued. On July 9, 1947, the Daily News of the Roswell, New Mexico published a sensational news: The air force found UFO in Roswell. This news was re-published immediately by the New York times and other newspapers, and also the radio waves spread around the world. News like a bombshell immediately caused a sensation in the American public. A lot of people come from all directions to the southern United States of New Mexico, to see the UFO and aliens. 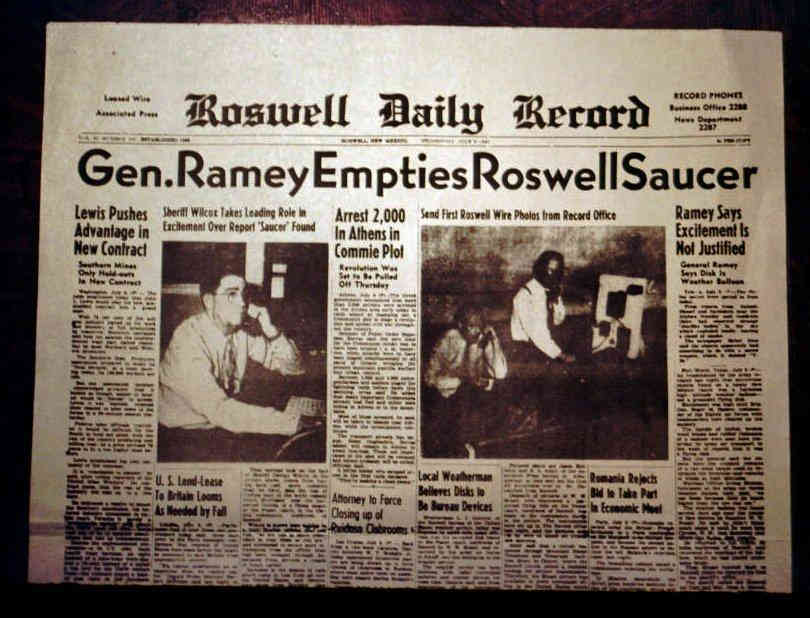 On July 9, 1947, the Roswell incident released by the daily news, after six hours the army commander General George Remy was ordered to take responsible for this event. He showed major Marciel some pieces of the meteorological ball and arranged a press conference in a hurry. The general said his officers had made a mistake that there is no flying object. Just crashed object with a weather radar reactor. Military overthrow all the things. And the local radio station manager Zhu Roberts also received from Washington’s orders: Do not broadcast any information related to the flying object. 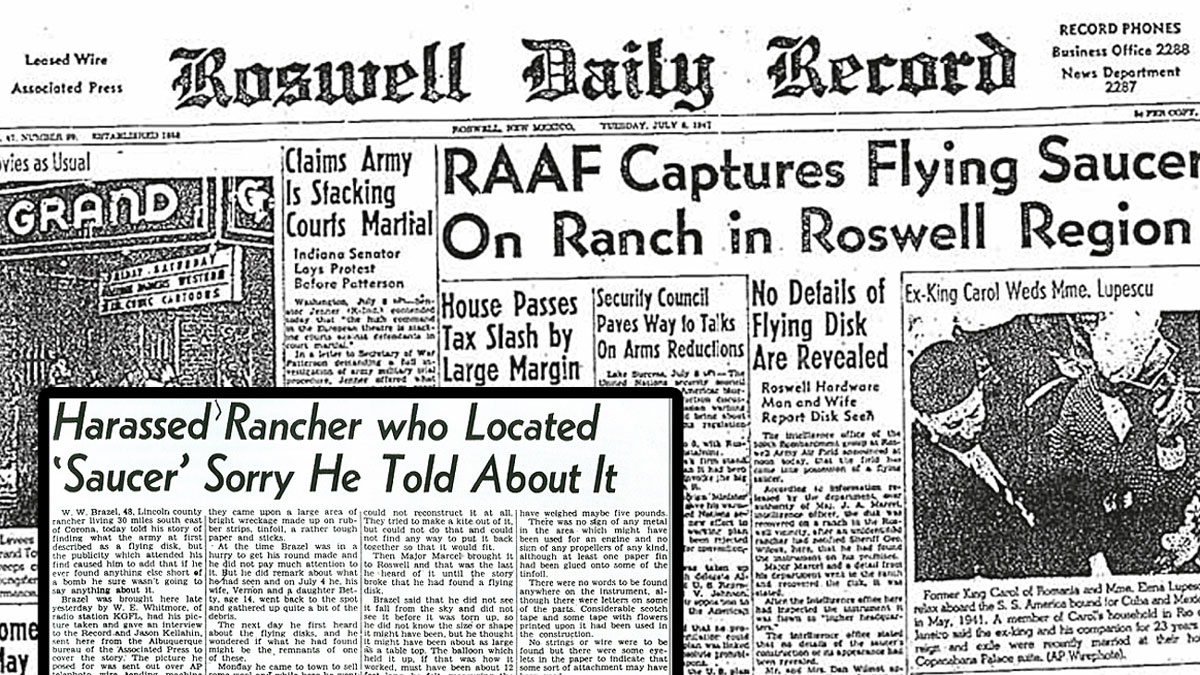 By July 10, 1947, newspapers are beginning to clarify the crashed unidentified object is the weather ball, rather than an alien flying object. Due to the change was too fast, so people began to suspect that there are secrets, but most people believe that the so-called meteorological ball is only the military statement for camouflage. In half a century later, in 1997, the U.S. the military argued that the so-called aliens is made in order to bounce in flight test dummies, but Americans position transferred too stiff, so made people feel this is just to hide again. 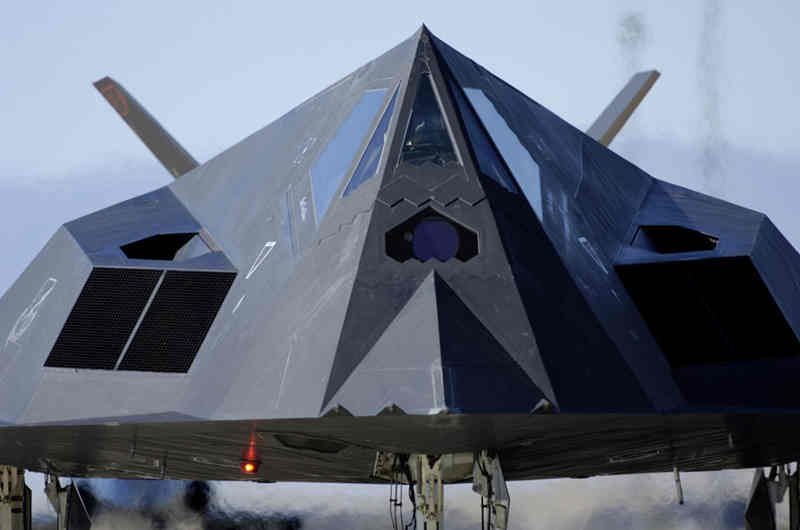 It is said that Americans are inspired by the parts from the wreckage of the flying object, and developed F117 stealth fighter and the F35 fighter jets and also other high-tech weapons, or the American military technology could not be advanced so much. Every year many explorers arrived to the area 51 searching the answers. Even it could be caught by the U.S. military, but someone willing to take this risk. Hope the truth of Roswell incident may have the answer in a few decades for the efforts of so many explorers.