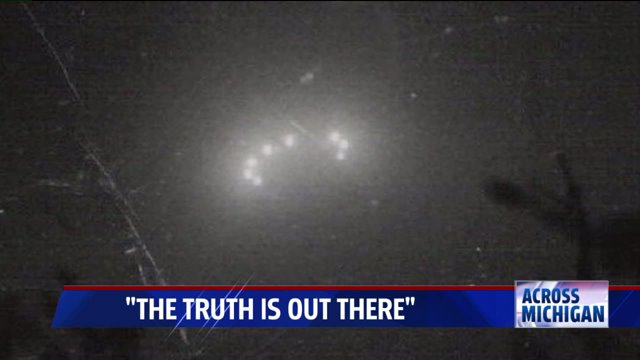 When it comes to UFO sightings across different states of America, Michigan happens to feature in the list of top 10 states with maximum UFO sightings. From donut shaped UFOs to fiery fireballs, everything has been spotted in the skies of Michigan, which had a tally of more than 3000 sightings in 2015 alone. Here are the top 10 sightings of UFOs that has been reported by Michiganians.

A large spider like UFO was being sighted on the evening sky of Michigan. The flying object had 8 tentacles like extensions and was moving very slowly from left to right. The UFO was seen flying at a height of about 300 feet from the ground.

A huge black cloud was seen moving in the skies of Michigan at a height of about 150 to 200 feet on 22nd October 2015. It was only after looking properly that the residents realized that what they were looking at was not a simple cloud, but a huge UFO.

A flying object with supersonic speed was seen travelling from one horizon to the other in the skies of Detroit, Michigan. While moving ahead at an abnormal high speed, the object was rotating and had many illuminated windows on the body.

Locals of Detroit, Michigan were speechless as they spotted a cloud in the sky forming a deep black hole portal. The cloud that emerged from nowhere vanished right after a few seconds. The portal, however, did not vanish in thin air before it made way for a UFO that came out at lightning speed and dashed towards the horizons.

A large donut shaped UFO was seen hovering in the skies of Michigan at a height of about 250 to 300 feet above the ground level. The UFO was seen stationery in the air while it was revolving around being static at the same place.

A large sausage shaped UFO was seen flying in the skies of Warren, Michigan on 25th March, 2015. The object initially looked like a gigantic floating balloon, but zoomed in images clearly revealed that it was more than a simple gas filled balloon that was flying high up in the air.

A large metallic UFO was seen flying slowly in the skies of Michigan during evening hours of 27th February, 2015. As per live witnesses, the flying object did not make any noise and it flew as swiftly as a huge hydrogen filled balloon.

The residents of Grand Rapids, Michigan were startled to spot a flying object in the skies that kept on disappearing at short interval of time, only to reappear again. The objects looked like the head and tail of a whirlwind that got closer to each other to get merged and eventually disappear not to appear again.

A mysterious flying object was seen hovering in the skies of Troy in Michigan. The object did not make any sort of noise as it remained stationery over the buildings and showed up for about a couple of minutes before vanishing in thin air.

One thought on “Top 10 UFO Sightings In Michigan”