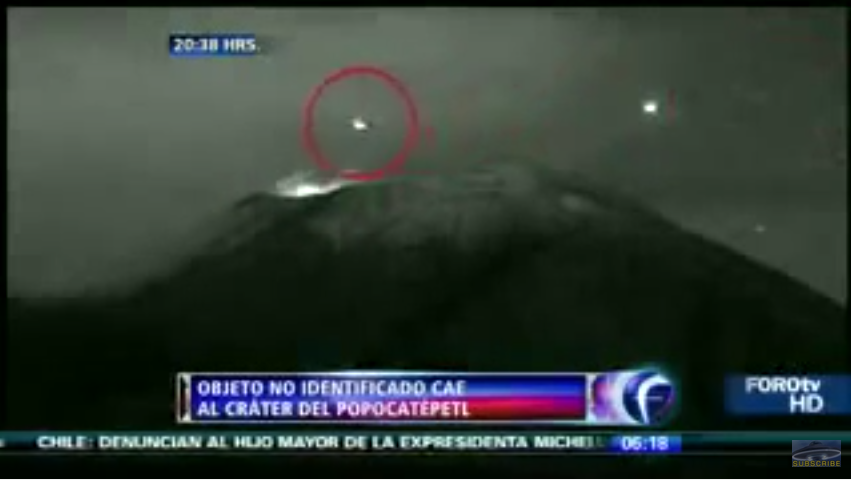 According to the British “Daily Star” reported the Colima volcanic activity was increasing recently, it spewed out huge quantities of magma with poisonous gas for multiple times and the ash as high as 1600 meters above, making the residents surrounding the areas have to leave. Colima volcano actually had about more than 100 years without large-scale eruption, so the recent activities cause the attention of the local people. Someone used instant photography to monitor the volcanic activity, in order to take timely response measures, but captured something like UFO flying through the above of the volcano unexpectedly.

In the monitoring video of volcanic activities, the UFO researchers found that volcanic eruptions occur when the UFO quickly fly thought the volcano eruption position. The video shows the UFO fly speedily from the right side to the left side with a straight line, and the whole process is only about 5 seconds.

The UFO Sightings of Daily editor Scott C Waring said on 27 January, the elongated UFO image appears in Colima volcano monitoring video on the January 3rd, and the UFO flying thought the volcano which is spraying lava. He said: when a UFO flying over the top of the crater, there is a flash vision and then turn to black after the UFO disappeared.


Waring said: I believe when the UFO flying over the volcano, it took away or sent something to the volcanic underground base. He also believed there should be a UFO bases monitoring seismic activity under several kilometers of the volcano.